You are here: Home / Simon Cran-McGreehin 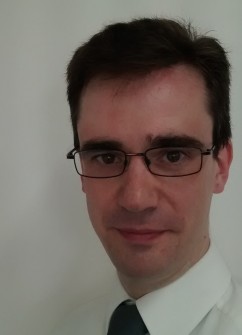 Dr Simon Cran-McGreehin left ERP at the end of September 2017. He joined the Analysis Team as an Executive Analyst in September 2013.

Previously, Simon completed a Ph.D. in Physics at the University of St Andrews, and continued the research as a post-doctoral assistant.  His research area was the use of semiconductor processing to create miniature “optical traps” for biological tests.

He then worked at Ofgem for six years (including a secondment in Brussels), covering a range of topics in energy policy, including retail market issues, energy efficiency, environmental policy, and finance.  He worked primarily on electricity networks policy, including tariffs for using distribution networks, and funding decisions for large scale transmission projects.

Simon has broad scientific interests, has volunteered with environmental charities and currently volunteers at Parkinson’s UK, a medical research charity.