You are here: Home / Andy Boston 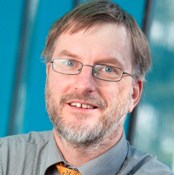 Andy joined ERP as Head of Analysis Team in July 2013, initially on secondment from E.ON before taking on the role permanently in February 2014.

As well as leading the team Andy has led two projects, Managing Flexibility of the Electricity System and International Engagement. In an earlier engagement with ERP he oversaw the delivery of the Energy Sector Skills brochure and the Energy Technologies Matrix.

After graduating from Oxford with a BA in Physics Andy joined the Central Electricity Generating Board’s Leatherhead labs working on thermodynamics and steam turbine efficiency. At privatisation he moved to Powergen’s Technology and Research Centre where he worked on the development of wind power and other renewable technologies. He soon became involved in  modelling the new electricity market that was emerging in the UK and that expertise was later used to analyse electricity markets around the world in support of PowerGen’s international acquisition programme.

In 2001 he took on the role of leading the Business Modelling Team which became part of E.ON New Build and Technology. He worked on modelling the ETS and took a particular interest in low carbon technologies and their effect on the wider energy system. He managed a number of external research programmes for E.ON, notably the Transition Pathways project and the development of ETI’s energy system model ESME. He was also involved in supporting the ERP in its early phase before the formation of the Analysis Team.

Immediately prior to his secondment to ERP he was Technical Head of Energy Systems overseeing quality of work in the low carbon, energy modelling and optimisation fields. His particular areas of interest are renewable intermittency, security of supply, energy system modelling and electricity markets.