You are here: Home / News / Catching the Tide 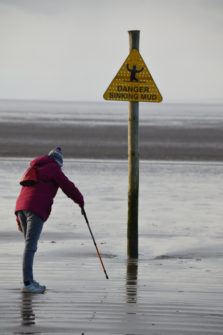 I’ve just spent a weekend on the coast in Somerset, and on Saturday found myself at Weston-Super-Mare (or Weston-Super-Mud as we used to call our nearest seaside resort as a child).

I was there at low tide and it hasn’t changed, nearly 2 miles of mud stretched out before me with the sea a distant ripple on the horizon.

But the acres of mud nicely illustrated the dilemma facing the architects of our energy system (if we have any). The vast tidal range in the Severn Estuary could generate a significant amount of renewable energy – there is potentially some 20TWh p.a. upstream of Weston. However the twice daily uncovering of the mud provides a vital food source for many birds. Turbines are not ideal passageways for marine life, and organisations such as RSPB are nervous about tidal developments.

So although many environmentally conscious organisations welcome the positive outcome of the Hendry report others advocate a much slower pace of development than Tidal Lagoon Power would like. They see Swansea Bay as a “pathfinder project” to be followed relatively quickly by a scheme nearly ten times the size at Cardiff.

So what are the pros and cons of tidal lagoons?

✔ It’s renewable: All things being equal this has to be a good thing. Tidal schemes harness the rotational kinetic energy of the earth, and as long as we neglect the immeasurably small lengthening of the day the scheme will cause we can safely classify it is renewable.

✔ It’s predictable: Unlike weather-dependent renewables, the variation of output from tidal schemes is at least predictable.

✔ It’s long term: Whilst in the West Country I went across the Clifton Suspension Bridge. Completed in 1864 its original ironwork is, I was told, as good as new (even though it was second hand when built!). Similarly the lagoon structures will be built to last 120 years – almost unheard of Victorian-style engineering!

✔ It could bring local benefits: “I think it is beyond question that, in the case of Swansea Bay, local economic regeneration would follow a tidal lagoon.” – Hendry Review.

✖  It’s expensive: Much is made of Swansea being a “Pathfinder” project. Hendry compares it with pathfinders of other technologies producing the same output and finds it is 50% more expensive than nuclear and three times the cost of offshore wind over a 30 year payback. However go full size and he reckons lagoons can beat nuclear but not catch offshore wind.

Sea level and energy output of a lagoon

✖  It’s intermittent: Lagoons typically generate for just under half the tidal cycle and produce nothing for the remainder. There’s a misconception that with enough tidal lagoons around the country the system can enjoy baseload output in aggregate. This neglects the fact that during neap tides (once every two weeks) the tidal range is typically half of spring tides (which follow full and new moons) and as energy available is roughly proportional to the square of the range then output of all schemes will fall to around ¼ of maximum on the same day. The chart shows a simulation of the output of a lagoon at Swansea for 4-14 February 2017. It’s no wonder the proposed load factor for Swansea is as low as 19%. So, true, with an ideal portfolio of lagoons, built in places with different tidal phases, there is a component which is baseload, but it’s very small – around 10% of capacity.  In any case building such a portfolio of lagoons is in Hendry’s view “too ambitious a goal”.

✖  It may have local negative impacts: Lagoons as large generation assets are an unknown. There is potentially a problem with silting, the impact on wildlife has already been mentioned and careful consideration needs to be given to conflicts with existing businesses on the foreshore and at sea. Some of these are unknown and represent a risk to the project.

So, my opinion is that on balance we give it a go. I think the benefits outweigh the problems and a small scheme should help reduce the risk for later ones. But let’s not kid ourselves that this will herald a new wave of limitless renewable power. David MacKay in Sustainable Energy Without the Hot Air has its potential as significantly less than offshore wind, as do most other commentators in his comparison (Fig 18.6). At very best the total resource is only 5% of our energy consumption according to MacKay. But it might be a useful addition to the mix if its costs can be brought down significantly.