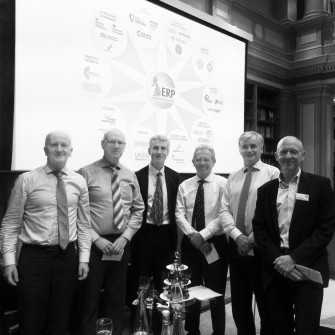 Following the Annual Dinner of the Energy Research Partnership (ERP), attended by ERP members and colleagues from the wider sector, a panel of ERP Co-Chairs from the past, present and future led a debate on:

“What are the biggest challenges facing innovation in the energy system over the next 10 years?”

Professor Julian Allwood, ERP member from The University of Cambridge, chaired the debate and invited the panel members to each give a five minute insight before the floor was opened for comments.

Sir David King, the Foreign Secretary’s Special Representative for Climate Change, opened the debate by saying he was very proud to be the founder of ERP, set up for government and industry to talk together about the transition to a low carbon economy. At the time R&D was at a very low level, but now we are entering a phase where global investment is $3-6trillion per year and 250,000 people are employed in clean technologies in the UK. Sir David also pioneered the Global Apollo Programme, now Mission Innovation, which will spend $30billion per year on clean energy. The key challenge was to get the message out that it is a massive growth sector; the UK was ahead of the field and so should seek to reap the benefits.

Nick Winser, Chairman of the Energy Systems Catapult and the second industrial co-chair of ERP, started with a reminder that 10 years ago when ERP was formed the strategy for decarbonisation was to use big nuclear, big carbon capture, and big offshore renewables. However, given the difficulty of establishing a carbon price and the current difficulty with large projects, the future approach looks to be more bottom-up, with more storage, more buildings’ thermal insulation, more local structures (but also international links). The future is also now much more about heat and transport, with a rolling transformation over 35+ years.

Keith MacLean, Chair of the UKERC Advisory Board and the current industrial co-chair, said there were three things we had to do. Firstly we had to ensure that we maintained private investment, warning that in times of stress innovation is the first expenditure to be cut. So we need enduring decision making with a strong public sector lead, setting out principles that give direction but allow flexibility in the plan. Secondly a whole systems approach was needed to cut through the increasingly fragmented structure that prevents parts of the sector from talking to each other: competition should be used in delivery, not in decision making. Finally we should look to the future, not the past. The past is defined by fuel costs, the future is dominated by capex, but support mechanisms don’t always recognise that.

John Loughhead, Chief Scientific Advisor at the Department for Energy and Climate Change and the current public co-chair, said there was a major lesson to be learned from Brexit: unpredictable events will throw plans off course. Industry needs to break out of conventional thinking: there is no shortage of energy sources, and it is the environment that is the constraint. The focus should be on the system and not the components, but aligning public and private aspirations would require effort and post-Brexit we would need an international engagement strategy. We should look out for the passing of significant milestones, the next of which would be reaching 50% carbon reductions. Beyond that it gets much harder, but setting and achieving a target reliably is better than missing a higher target. The UK will need the brightest and best workers, but is not always successful at attracting and retaining them.

Martin Grant, CEO Energy Atkins and future industrial co-chair, started with a reminder of what is not going to change over the next 10 years: carbon will still be a problem; there will not be one solution; and we’ll have to pay more for energy. We had to be aware that a lot of innovation solved wants not needs (e.g. space travel, mobile phones, post-it notes). Our nearest comparator as a driver for energy innovation was war (expect that energy is cost-bound); the question was how to get the same intensity of effort. We need to recognise that innovation needs a combination of technology and market forces. We need to value more highly the energy we use. And we need to pick the correct areas of endeavour to get academia and industry working together. The UK has some big successes to shout about (e.g. offshore wind), and we now need to sell our expertise.

Julian Allwood, as chair, wrapped up the panel’s thoughts by summarising their insights and adding his own: The demand side is often neglected and needs urgent attention, for example we still drive around in cars of more than 20 times the mass of the passengers.

Comments were then invited from the floor and the following themes emerged. The panel members’ were given a short time to respond, and these comments are included with each theme.

* Biomass has not been mentioned but has an important role. Drax, for example, is largest generator from biomass, and innovation is important not just in the power generation but along the supply chain.

* Processing power is increasingly ubiquitous and cheap, and can be harnessed to tackle the complexities in the energy system.

* The energy community needs to break out of its conventional thinking. However we are trained that way so how can we become innovative? We need help from out-of-the-box thinkers.

In response, the panel noted that the timescale between invention and roll-out in energy is typically 40 years; the fastest seen is lithium ion batteries (20 years). So some of the innovation’s starting now could take 40+ years to get through to market.

* We may not yet have exported much technology but UK policy has been exported: liberalisation had a big influence internationally as well as the Climate Change Act. How do we match that with industrial success?

The panel agreed that policy influence has been the most important international influence. In fact no government has done more than the UK to deliver Paris, with 13 years of work from 100 climate attaches at UK embassies around the world. However, we can’t say we won’t be involved in innovation – it’s a big mistake to write off the UK in this endeavour.

* The role of the consumer is too often ignored.

* There’s a big difference between heat and transport. EVs are now becoming very attractive to drivers, but low carbon heat technologies are not.

The panel agreed that consumers are very important for energy decarbonisation. The panel also agreed that buildings’ thermal insulation is critical. However there is a danger in assuming that consumers want to engage with the system (“energy democratisation”); many do not want involvement and just want to “flick a switch”.

The panel also agreed that heat is a bigger challenge than transport in terms of customer interest. They noted that electricity has a major role in transport (for cars), but it is not the full solution (HGVs will likely be non-electric).

* There is actually a “wall of money” in the markets looking for good energy investments; lack of capital is not actually a constraint.

* The setting up of the Committee on Climate Change was an important step and should give long-term stability with targets, however, political cycles are much shorter and programmes quickly overturned.

* We are now in the middle of a revolution in energy, transport, digital services, and politics. But are governments up to the challenge of the level of complexity this has created?

* Markets aren’t up to the challenge either – there are no natural markets for energy, especially electricity, so the markets are constructed.

* Markets can’t deliver in every area. One of the biggest leaps forward has come from the 2006 regulations requiring that new boilers be condensing boilers, which quickly had an impact. We now need more such regulation for buildings’ insulation.

* Markets and governments are suited to delivering different types of products: “markets deliver iPhones, and governments deliver tanks”. We need to spend funds on innovation for the next generation of energy solutions, instead of on subsidising the deployment of existing technologies.

The panel noted that we don’t know if markets will work, but if we want them to work then we need to value the product differently, and we need the government to take over if there is a failure.

One panel member agreed that regulation makes a big difference, e.g. supplier obligations have dramatically increased installation rates of insulation compared to market-driven uptake. Another agreed that regulations are a means by which government can get an instant response: Feed-In Tariffs led to reductions in product costs; and the UK used to have world-leading ambition in buildings regulations, including EU regulations that would have driven big changes in new buildings by 2019.  Finally, another panel member referred to the regulations for new boilers, noting that although the roll-out of condensing boilers is often quoted as a great example, we have to ask how many actually condense?

Julian Allwood closed the session by thanking the panel members and dinner guests for their contributions.