You are here: Home / News / The ghosts of ERP past, present and future

On 11 July ERP held its annual dinner and in what felt like a parody of A Christmas Carol we welcomed Co-Chairs past, present and future to give some wise words on our future. 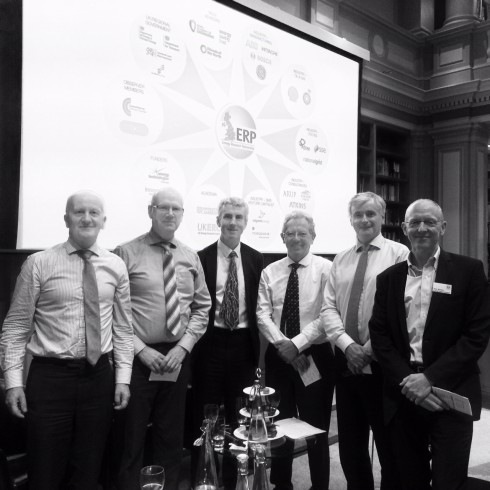 Sir David King expressed his pride at being a founder of ERP 10 years ago, closely followed by Nick Winser the second industry Co-Chair, who was pleased to have set up the Analysis Team. Our current co-chairs, John Loughhead and Keith MacLean, gave us their view and Martin Grant, Co-Chair Elect rounded off our look into the future. They were expertly managed and kept to time by Professor Julian Allwood in the chair.

Five themes emerged from the panellists’ thoughts and the subsequent comments from the guests. Firstly there is a need for a strategy, and it is going to be different to the vision 10 years ago which was that big nuclear, big carbon capture and big offshore wind + electrification would save the day. Political will, it seems, has gone soggy and big techs, although still important, aren’t going to get us there. Gone also are the days where fuel costs dominate, the new paradigm is the need to recover large capex, but unfortunately support mechanisms don’t always recognise that.

Secondly many spoke about the need for a whole systems approach in a world that was becoming increasingly fragmented. The focus needed to shift from optimising compartments of the system to the whole. It was suggested that the consumer should be regarded as part of that system, so their needs were part of the equation. In this way energy efficiency could gain its rightful importance. We needed to be wary of assuming that consumers all wanted the democratisation of energy, many just wanted to flick a switch, and some thought that the consumer’s valuation of energy should increase, thus increasing its appreciation.

Quite a lot was said about the different roles of the public and private institutions involved. The public sector should lead with strong decision-making that delivered strategies with clear underlying principles robust against unpredictable events. The public sector had to recognise when regulation was needed (eg in the successful rollout of condensing boilers at 10 x the market driven pace) and understand the pivotal role of the monopolies (like the networks) that they control. The private sector too has a role in delivering the plan, and is generally much faster at innovating when market pull is felt.

The recent Brexit vote added an international focus to the debate. The UK is the world leader in climate change diplomacy, having 100 climate attaches working from embassies around the world. However leaving the EU might expose the paucity of the UK’s international engagement strategy.  The UK has exported climate policy, but it is important it doesn’t miss out on reaping the benefits of being a leader by exporting its technology.

Looking to the future the panel saw a rolling transformation of many decades. It would need industry to break out of its conventional thinking (where were the pony-tail and top-knot men?) and also make use of massive increases in processing power. As well as an energy revolution there were also transport, digital, and political revolutions in play, and it was feared that neither governments nor markets were up to the complexity of the challenge they posed.

As the debate closed it was suggested that a lot will change in the next 10 years but three things will probably remain: carbon will still be a problem, there will be no one solution and we’ll have to pay more for our energy. However another panellist reminded us that his predictions of 10 years ago were completely wrong, so it will be interesting to read this in 2026!