You are here: Home / News / Hinkley. The Price is Right? 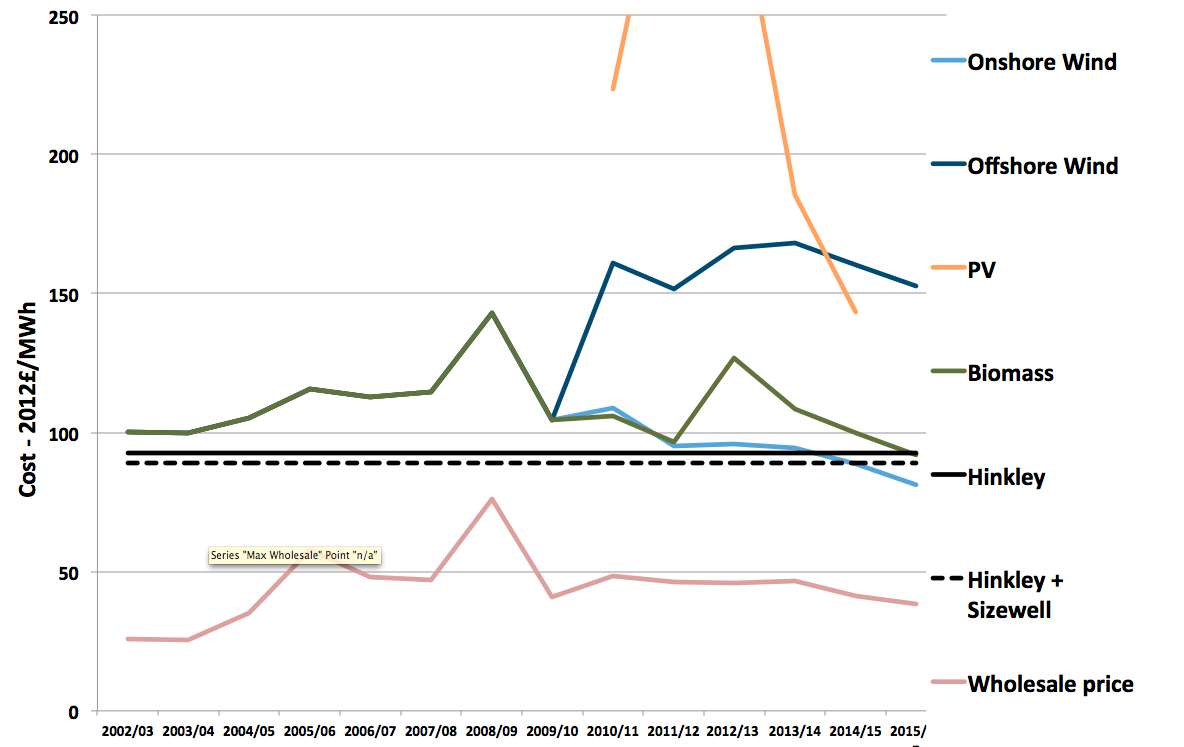 The decision to proceed with Hinkley has stirred up many passions, for and against, but an overriding criticism has been its cost, so how expensive is it exactly? At least we all know it will cost £92.50/MWh, potentially dropping to £89/MWh if further EPRs are built, in 2012 prices. Firstly many headlines have focused on the price compared to today’s wholesale price pointing out it is more than twice the cost. This is entirely true, as wholesale prices have been around £40/MWh the last few years. However this is not a very useful comparison as current prices are set by ageing, fully depreciated fossil plant that are being closed or moved to peaking only duties. The new wave of replacement generation we need (to hit our carbon targets) has to be low carbon.

So I thought it useful to look at what we are actually paying for other sources of low carbon power at the moment. The chart shows that through the Renewables Obligation (RO) and the Feed-In-Tariff (FIT) schemes over the last five years we’ve been paying £80-110/MWh for onshore wind, £90-130/MWh for biomass, £150-170/MWh for offshore wind and £140-300/MWh for PV.

But, some would say, it’s not about what we’re paying now it’s about what we can achieve in the future, after all Hinkley won’t deliver a single MWh until at least 2025. It can be seen from the chart that costs are reducing. True, but then Hinkley is the first of a kind in terms of nuclear generation that can meet the new tough Generic Design Assessment (GDA) standards, whereas these other technologies will be mature with 10-20 years of development subsidies behind them.

Should nuclear not be given the same start as the others?

The final point in these comparisons is that I can’t recall seeing any that have tried to evaluate the additional services that each technology can offer. Even if we have an accurate picture of the £/MWh values the comparison is flawed because the MWh provided by some technologies come with a range of other services, some of which are becoming very valuable. Take firm capacity for example, a fleet of nuclear can guarantee an output of around 80% at winter peak with a very high degree of certainty (99+%). The same level of certainty applied to the wind fleet would come out at less than 5% of capacity, indeed we’ve seen occasions where the UK wind fleet has been generating at less than 1% in the winter –the cost of providing the back-up service is not assigned to wind. Flexibility services also have a value, nuclear comes with a lot of inertia, but biomass is even more valuable offering reserve and frequency response services alongside its MWh delivery. ERP’s work on flexibility has shown how accounting for these can sometimes reverse the merit order of technology investments based on cost alone and that the value of a technology is strongly affected by the existing grid mix.

So, in summary, the cost of Hinkley is not dissimilar to other low carbon options, and is at the lower end of what we’ve paid to date. The key message though is that prices are going to go up, and go up significantly. Last year we paid around £110/MWh for more than 75TWh of renewables, equivalent to 3 Hinkleys. Locking in another 25TWh from Hinkley means we have now committed to more than 100TWh (out of 360TWh of generation) at prices which are 2 to 4 times current wholesale prices. Although wholesale costs are only a small part of what the consumer pays the significant investment needed in the networks to accommodate our low carbon revolution means that the uplift from wholesale to consumer price is also likely to rise.

Furthermore electricity is only part of the story, the price of heat is also likely to rise as it is subject to similar forces.

Should we not engage with the public now and begin the process of setting expectations? In fact should we not already be engaging with them to develop a strategic narrative and foster trust between the public, industry and government to deliver the energy transformation. I think so, but that’s the subject of another ERP project…