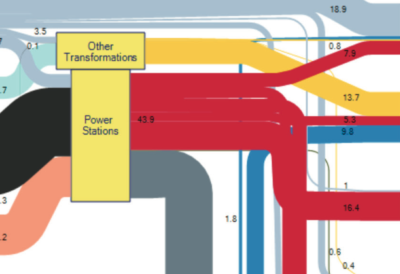 Until recently it has been a sufficiently good assumption to treat the different energy sectors separately, or as having a well understood interface with limited applicability such as industrial combined heat and power. However there are a growing number of cross connections and many proposed solutions shift the burdens of sourcing primary energy and decarbonisation from one sector to another. Conversely the solutions to problems in one sector may be found by linking it to another.

For example the increasing use of electricity for transport and heat doesn’t in itself reduce emissions but moves the decarbonisation issue to the power sector where it is perhaps easier to solve. New energy vectors like hydrogen in particular will also strengthen links between the sectors. Hydrogen could be used as a replacement for natural gas for heating, it could be used for transportation, it could be used for power generation or be produced from electricity, or store energy for all three sectors. However a recent ERP study found that the use of hydrogen as an intermediate energy carrier will increase primary energy demand which is likely to manifest itself as an increase in natural gas consumption. In spite of this studies on the use of hydrogen rarely focus on upstream issues but simply assume sufficient zero carbon hydrogen is available to bring the downstream benefits.

Other linkages come through technology innovation. For example ERP’s study on hydrogen found that it cannot be generated in significant volumes without the use of CCS, so a scenario with a hydrogen economy implies a well developed capture and storage technology. This in turn means this option is available for the power generation sector and for greenhouse gas removal through BECCS, which for a specific carbon budget would allow more carbon to be emitted from difficult sectors such as aviation. Hence the apparently isolated choice of hydrogen for heating will have ramifications for many other sectors.

At the mid and downstream end of energy services there are further links that come about. The connection of EVs and heat pumps to the system are often quoted as being able to deliver services back to the grid as well as consuming power, but understanding this capability requires a knowledge of how they will be used, and importantly how a user can be persuaded to change their usage in some way so those services can be delivered.

Finally there are growing connections outside of the traditional energy sectors, particularly where resources are constrained. For example the ERP project on Resource Use Strategies examined the key nexus between energy and water – each sector is strongly dependent on the other and constraints in one feed through to the other. Agriculture too has significant areas of uncertainty around the effect of land use change (potentially imposed by the demand for biomass) and the lock up of carbon in soils. If opportunities for carbon removal, or dangers of carbon release, are greater than anticipated this could have large implications for the carbon that can be emitted by the energy sector.

A number of models exist that model the entire energy system (e.g. ETI’s ESME or UCL’s UKTM) and other organisations are better placed than ERP to undertake whole system modelling. However there would be value in ERP looking across the work in this area and synthesising a view of:

CLICK TO VOTE: I think this should be an ERP priority